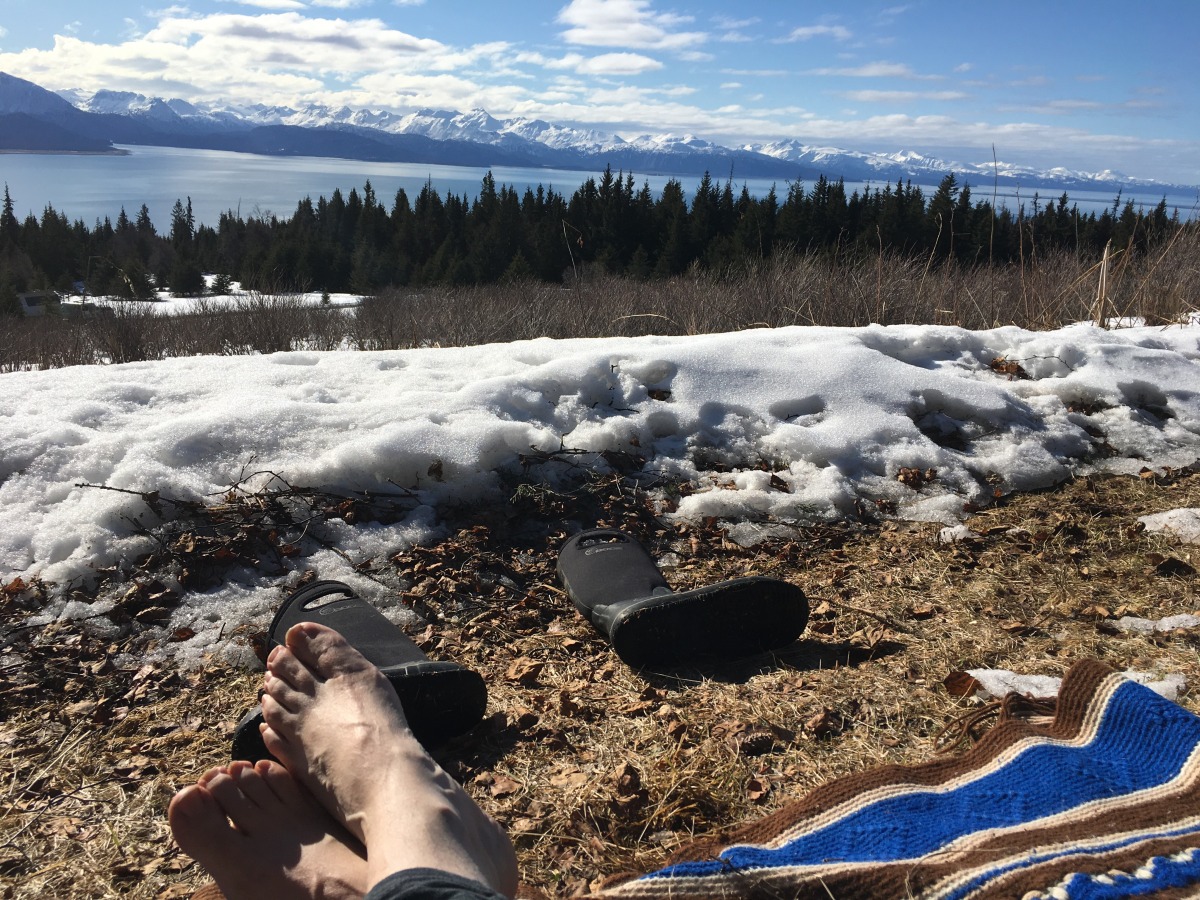 Spring Equinox was this past Sunday and for a while in the late morning after it warmed up to nearly 40 degrees, I camped out on a blue and brown thrift store afghan on a south-facing, wind-protected piece of earth in our yard. I brought my journal and my favorite mechanical pencil with me and thought I’d brainstorm ideas for this blog post, but out there in the bright sun and cool air my mind wasn’t big on ideas. It was just taking it all in. The heat of the sun against my black jacket, cool air on my face, the shimmer of light on the bay, every contour, shadow, ridge and knoll on the snow covered Kenai Mountains, the chirping squirrel in the tree behind me, neighbors hammering and sawing in their yards, a raven chortling in the distance, chickens murmuring in their pen, faint music coming from the deck where Dean was planting more seeds to fill our garden beds that are still buried in snow.

It was the kind of day like the days that make their way into my January dreams. Only this one was real.

I thought I’d sit for fifteen minutes and fill a page with ideas but instead I sat for a couple of hours and tried to list the things I noticed. Newly hatched insects floating up from the ground, last autumn’s musty smelling leaves, the cool, damp earth against the soles of my feet,  light reflecting off the crusty snow covered mountains, magpies hopping from tree to tree, eagles circling overhead, melting snow all around me, the voices of neighbors, sun on my skin, wake lines left by small boats on a glassy bay.

When I let go of having to write something meaningful and allowed myself to become an observer, I freed myself from my own busy mind.

The natural world I observed was not vying for my attention. It was not trying to sell me anything. It was not twisting facts or trying to keep secrets. It was indifferent to my place in society, my age, my education, my past. I did not feel unsettled by anything I witnessed. There was no veil of judgment between me and what was around me. No expectation.

And so here I am two days later, still unsure about where to go with this post. All I’ve got this time around is that I sat on a small dry patch of grass beneath a spruce tree for a couple of hours on Sunday and took in as much of the world around me as I could. I soaked in the sun. I filled my lungs with fresh air. I listened to the sounds of a changing season and stopped trying to make sense of things for a while. It was peaceful and it was good.

Maybe for this week that’s enough.