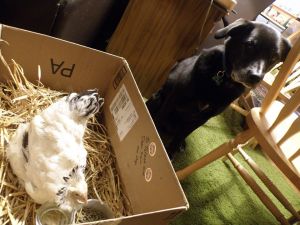 I have a chicken in my house. She’s nestled in a straw-filled cardboard box in my daughter’s bedroom. Newspaper is spread over the floor and every few hours I go in and take her out of the box so she can walk around a bit, fluff out her feathers and spread her wings.

I probably should have taken a friend’s advice and offed her when she was a chick. I should have done the deed when it became apparent that she was weaker than the others in her flock. But I didn’t. So here I am with a chicken in my house.

While the other chicks put on weight and seemed to thrive, this one—a fluffy, feather-footed brahma—stayed significantly smaller. She had tremors from time to time and was always a step behind the others. But I didn’t kill her off. She didn’t seem to mind her status as the weakest of the flock and the others didn’t pick on her, so I held out hope that she’d catch up. But she never has.

For being with a rooster and six other hens that are much pushier than she is, it’s remarkable that she’s done as well as she has. She’s been able to sneak between the legs of the others to the food bin and she finds her way to the kitchen scraps that I offer. At one point in the summer, a neighbor dog came into the yard and attacked our chickens. When I assessed the damage, I found small pile of white feathers and figured she was toast, but later that evening she was back, no worse for all the excitement. Even in her weakened state, she escaped a dog. She had an instinct to live. After that, I figured she just might make it.

But last week I could see that something was wrong. The comb on top of her head was sickly pale, she was wobbly on her feet and she didn’t rush to greet me. At one point she was hunkered down outside of a laying box and another hen jumped on top of her and used her as a springboard. That’s when I decided to bring her inside.

“I’ll take care of her for you,” my husband said.

He wasn’t offering to care for her.

It’s been three days now. The comb on the top of her head is looking brighter. She’s getting steady on her feet. She seems downright excited when I go in to check on her. This is not surprising since she is in a heated room, does not have to compete for food and has been given hard-boiled eggs, lettuce, and sesame seeds to supplement her diet. Earlier this afternoon I took her out on the deck for some fresh air and she turned around and headed straight back to the front door. She may be the weakest of the bunch, but she’s no dummy.

I watched a documentary a while back and in it the filmmakers went to a chicken factory farm. It showed one of the workers walking through the place picking up corpses of chickens that had died in the night. He was talking to the camera and not fazed at all by his chore of throwing the dead into a big pile. To that worker, the chickens were something besides animals–they probably had to be in order for him to do that kind of job.

To be clear, I’m not such a terrible softy. In my years of raising chickens I have discovered a few of my own that have died in the night. I’ve disposed of their bodies without fanfare or undue emotion. I’ve even raised chickens for the purpose of eating them. I’ve helped with the butchering. I’ve dipped their dead bodies in boiling water, plucked them clean and wrapped them in butcher paper.

So why is it that I care about this weak little chicken so much? And while we’re talking about it, why is it that I am having a hard time imagining butchering the rooster that’s out there, bossing around the flock, crowing like a maniac during daylight hours and eating up more than his fair share of the expensive chicken food that I buy?

Maybe I am a terrible softy.

Maybe this is the crux of my dilemma: Killing these unproductive chickens makes sense if money is what’s most important. But I don’t see these animals as just a commodity. I realize that is something of a luxury since my family is not going hungry, since our survival does not depend on the maximum number of eggs, since a little extra money spent on chicken food is not going to leave us wanting.

But what to make of that little voice that says, “Just cull the flock of the weakling. Just butcher the damn rooster and have a nice chicken dinner.” Is it my own stubbornness that makes me want to ignore that voice?

I admit that part of my decision to tend the flock—weakling and rooster included—is an experiment. I want to see what happens when the chicken is given a little extra care. I want to know if there is intrinsic value in keeping these animals alive.

If I think about it too much (and I am) I have to ask myself if this is a selfish kind of kindness. Am I just making myself feel better by tending to this floundering chicken? Maybe, but it’s not as though I have a close relationship with this animal like I do my dogs. I haven’t named her. I’m not going to let her live in the house indefinitely.

I think it has more to do with what feels natural to me. Caring for this animal is not something I have to force myself to do. It’s easy. Sure it takes time and effort, but I don’t have to dig deep within myself to find the strength to do it. Killing it, on the other hand, would be a stretch—unless her suffering became too great.

Right now she seems to be okay with being alive. She stands up in her box when I enter the room. She’s eager to check out whatever morsel I have to offer. She’s making progress. So I’ll continue to root for this underdog. I’ll try to bring her back to health.

Her recovery will be a nice reminder of what is possible.

Maybe she’ll even get a name.