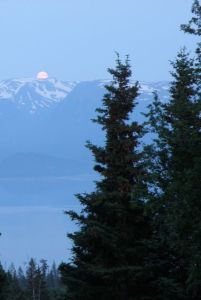 The other day at work my computer was out of service. It was the perfect time for me to tackle a few tasks that had been piling up. I did some filing. I made some phone calls. I did a little shelving. And then I listened to the fifty-two messages that were saved in my voicemail.

The messages went back as far as 2008, and listening to them has given me quite a lot to write about, but for this post I’ll stick to the ones that were left in response to two pieces of my writing.

“Hello Teresa, this is Rollie Campbell. I’m a relative of yours. I read your bit in the Telluride Newspaper and I have to say—way. to. go. Some of those things should have been said a long time ago. And here’s my number if you want to talk.”

This message, along with four email messages from strangers, were waiting for me at work on the Monday after Father’s Day, 2008. I had written a piece for the High Country News about my father’s memorial service held on a hillside near Wilson Mesa, just outside of Telluride Colorado. I wrote honestly about how I’d been hurt by the service being turned into a sermon. Instead of memorializing my father, the person holding the service felt compelled to preach about hell, and how those of us in attendance who weren’t saved would most certainly go there.

It was the first piece of my writing that had ever been published. It was personal and it was pointed and it was syndicated in newspapers around the West. Hundreds of people read the column in their Sunday newspapers. It was terrifying.

Now I can look at that essay as a turning point in my writing life. It was the beginning of me digging a little deeper, going closer to the core of what I care about most.

I called Rollie Campbell—this distant relative of mine who was in his 80s at the time. He lived on Wilson Mesa when he was a boy. He knew my dad and my aunts and uncles when they were young. We talked for about an hour. He told me stories and answered questions. After speaking with him, I knew a bit more about life on Wilson Mesa in the 1920s and 1930s. I had a few stories to put with the names of the people who came before me.

I did not erase the message he left in June 2008. I listen to it about once a year—usually when I need some kind of reassurance.

–“Holy crap. Are you at work today? I need to buy you coffee.”

–“Hello. You don’t know me, but I want to tell you thank you. Something similar happened to me. I never told anyone.”

It was October 2012 and I wrote a blog post in response to a sexual assault that happened in Homer. I wrote it in a hurry and posted it in a hurry—before I could change my mind. Then I went into the bathroom and nearly threw up. Then I told my husband about it. I had never told him the story.

Unlike the message from Rollie Campbell, I’d forgotten about these messages. Hearing them again the other day brought me back to those first few days after I posted the essay on my blog. Lots of people were reading it, but worse, lots of people I knew were reading it. I felt more exposed than I’d ever felt in my life.

But an amazing thing happened. People responded. Men and women approached me at work, at coffee shops, in the grocery store. People sent me emails and private messages. While the feeling of being exposed never went away entirely, it was eased by the incredible sense of being supported by people who cared, people who had been through something similar, people who had a story of their own.

What I learned from that post is that courage begets courage. I only had the guts to write what I wrote because I’d read the work of others who had been brave. Then a few people had the courage to tell their stories because they’d read mine.

Listening to those voicemail messages made me revisit those essays from years ago. If I had them to write over again, I would change things. They are imperfect and perhaps a little self-indulgent. Writing them was difficult. I might have been wise to use a bit more caution. But would cautious writing have prompted people to call and leave messages?

For me, writing is always finding the balance between restraint and indulgence. Too much of either one is a bad thing and whether it’s fiction or nonfiction it’s always a struggle to reach that sweet spot. But I know, and the messages on my voicemail reminded me, that people want to read work that originated close to the writer’s heart. They want to read what is real. They respond to stories that reveal some of the author’s uneasiness and dread. Maybe sharing something so intimate makes us all feel less alone.

One thought on “Messages”