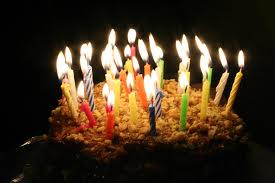 Just twenty years before my Grandma Ross was born, the average life expectancy for a woman in the United States was 45 years.  Coming across this bit of trivia this morning—this day of my forty-fifth birthday—makes complaining about getting older seem ridiculous and downright ungrateful.

Statistically speaking, there’s a good chance that I’ll have at least another thirty-five years or so on this amazing planet, and that’s something that women in their forties couldn’t say in 1879.  Seriously, I could spend this birthday pining for the days when my hair was more brown than gray, or for a time when I could fit into size seven jeans, but I’m thinking that since this is the beginning of those extra years that modern life has potentially granted me, I ought not to squander this day on pining.  Instead I’ll make a list of positive things about turning forty-five: